While traveling in Southern Laos, you could not miss the Champasak province as it is an infinitely peaceful city with natural and cultural beauty.

This province is the ninth largest of Laos with the area of ​​about 15400 km². Its climate is marked by the tropical monsoon and is divided into two seasons: the rainy season (from May to November) and the dry season (from December to April). Its chief town is Pakse, and many festivals are celebrated here, for example: the Wat Phou (Boun Wat Phou) in February, the monasteries festival (Boun Phavet) in March, the New Year (Boun Pi Mai) in April, the rocket festival (Boun Bang Fai) in May, The Buddhist Lent's entrance ceremony (Boun Khao Phansa) in June, the boat racing festival (Boun Sang Heua or Loy Krathong) in October, etc.

The dishes here are often spicy,sour or sweet. Particularly, the spicy dishes are more abundant and loved by the locals. The inhabitants of Champasak squat normally on the ground while eating. The elder members in the family always eat first. If invited to dinner in a local family, you should respect their traditional ways, the people here are very open and friendly. There are many hotels, shops, and restaurants, with reasonable prices, that you can find.

It is possible to go directly to Champasak by plane because there is an international airport that has flights to Pakse from Bangkok (Thailand), Saigon (Vietnam), Siem Reap (Cambodia), Vientiane and Luang Prabang (Laos) or by car through some border gates between Laos and Vietnam, Cambodia, Thailand. Then, once in the city you can move by car, by tuk-tuk or by bike.

We - Exotic Laos Travel, as your local faithful traveling companion, will do our best to make your trip in Laos unforgettable. 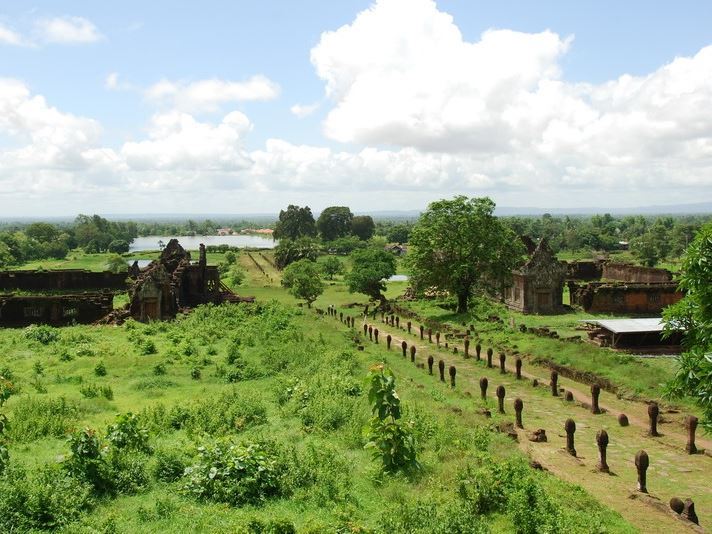 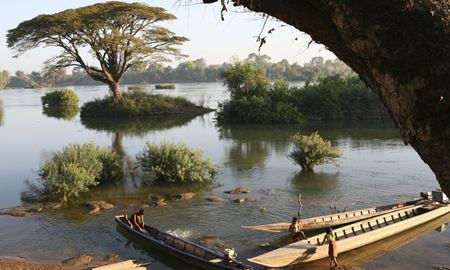 <p style="text-align: justify;">Located in the intersection between Mekong and Se Don River, Pakse is the capital city of Champasak province in southern Laos, where travellers can find a prefecture rich in spirit, history and natural beauty.</p> <p style="text-align: justify;">There are different <strong>ways to reach Pakse</strong> city:</p> <p style="text-align: justify;">- <strong>By air</strong>: Thanks to Pakse International Airport, one of the few international airports in Laos, Pakse is easily reached by taking domestic flights from Luang Prabang and Vientiane. Besides, well-known neighbors like Bangkok, Siem Reap and Ho Chi Minh City also have direct flights to Pakse via Lao Airlines.<br />- <strong>By road</strong>: If you want to travel into southern Laos by road, you can easily access Pakse from Thailand via Ubon Border or from Cambodia via Dong Kalor Border. <br />For particularly long road trip, Exotic Laos Travel suggest you to take a long van ride from Vientiane and hit many stops on the way such as Konglor Cave in Khammuane, That Sikhottabong in Thakhek, That Ing Hang in Savannakhet and many other attractions await you there.</p> <p style="text-align: justify;">Situated in a wonderful place in Southern Laos, <strong>Pakse city and its surroudings are a fantastic blend of culturals, historical and also naturels sight-seeings.</strong> <br />- We will send you undercover in some interesting places to discover local life as it’s lived every day such as in <strong>Dao Huang local market, Chomphet Stone Sculpture village and Ban Saphai silk weaving village</strong> on Don Kho Island. <br />- If you wish to learn about local history, it’s a must to visit <strong>Palace of Prince Boun Oum Na Champasassak and Champasak Provincial Museum.</strong><br />- Or you love being truly calm, you go to a peaceful place called <strong>Golden Buddha (Phu Salao)</strong> which is a large Buddha statue on a hill; and to <strong>Wat Luang temple</strong> which houses a Buddhist school. Those are places that you should not miss during your trip in Laos.<br />- To complete your tour in Laos, don’t forget to explore surroundings of Pakse, like Bolovens Plateau, Wat Phou temple, Ban Kiet Ngon and the famous Si Phan Don area with its thousand islands on the mighty Mekong River.</p> <p style="text-align: justify;">If you’re a first-time visitor to the Pakse and southern Laos, Exotic Laos Travel team are willing to provide all information that you need to know for a fulfilling tour in Laos, including the best off-the-beaten-track attractions, accommodations, restaurants, detailed information on the local culture, currency, climate and transport options.</p> 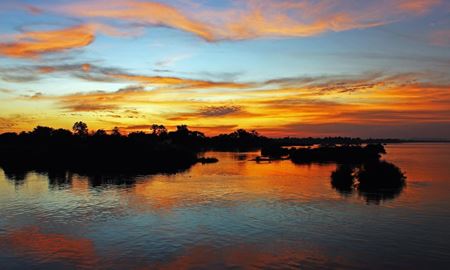 <p style="text-align: justify;">Once you start your journey to <strong>Champasak</strong> in the South of Laos, <strong>Si Phan Don</strong> will be undoubtedly on your not-to-be-missed attractions list. Si Phan Don is a riverine archipelago in the Mekong river, near the Cambodian border. There are three main tourist islands within Si Phan Don are <strong>Don Khong</strong>, <strong>Don Det</strong> and <strong>Don Khone</strong> and each island has its own attractions.</p> <p style="text-align: justify;">Among these 3 islands, Don Khong is the largest and also the closest to Pakse. Along the way from Pakse to Don Khong, you’ll pass 2 tourist attractions which are <strong>Wat Phou Temple</strong> and <strong>Ban Khiet Ngon.</strong></p> <p style="text-align: justify;">The island of <strong>Don Det</strong> is located south of the 4000 Islands, next to <strong>Don Khone</strong>. You’ll have 2 options to get to Don Det and Don Khone which are from Don Khong (2 hours cruising) or from Ban Nakasang (20 minutes transfer by boat). This island has many cheap bungalows, hotel rooms and also restaurants for tourists with a limited budget. The atmosphere here is ideal to take a moment to rest while enjoying a Mak Tum tea on the shore at sunset, or to stop at a small beach to bathe or go for a walk in a small fishing village to discover local life.</p> <p style="text-align: justify;">The island of Don Khone, connected to Don Det by an old french bridge, is a quiet island. Only 5 km long and 3 km wide, it is very easy to take a walk or bike ride on Don Khone. Besides, if you like waterfalls, go to the west of Don Khone to explore the Li Phi waterfalls, or in the east to the Khone Phapheng waterfalls, both of them are very impressive for their intensity and their surroundings shaded.</p> <p style="text-align: justify;">An unique experience that can only be found at Don Khone is to observe the rare <strong>Irrawaddy dolphins</strong>. From Ban Hang Khone situated in the south of this island, you can easily rent a boat to see this magnificent animal, in their natural environment, within the Mekong River.</p> 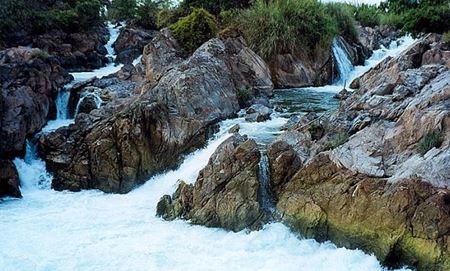 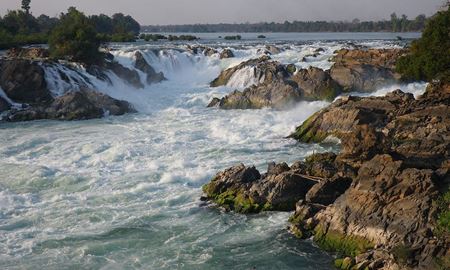 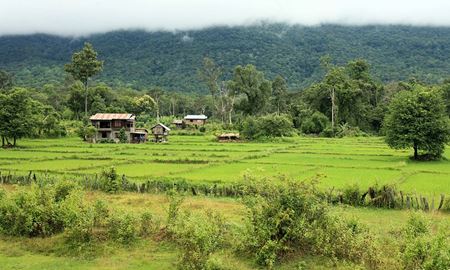 Luang Prabang → Champasak
During 7 days 6 nights, our local guides will bring you to all highlights destinations from north to south of Laos. You will visit beautiful landscape and meet lovely local people in Laos.
Price $928.00

Vientiane → Champasak → Luang Prabang
This program is designed for tourists who love to explore the culture, traditions and customs of the beautiful Laos. Enjoying gorgeous landscape and warm contacts with local people to understand about...
Price $1,084.00

Vientiane → Champasak
Taking road from Vientiane down to southern of Laos will be a memorable experience: Stopping on the way for photos of picturesque landscapes, tasting one the best coffee of the world, enjoying elephan...
Price $1,237.00

Luang Prabang → Champasak
Cultural and rural life of Laos Tour is for people who love discovering countryside landscand and life. During 11 days, you will meet villagers living from northern to southern Laos. You have chance t...
Price $1,373.00

Luang Prabang → Vang Vieng → Vientiane → Champasak
Real Laos Tour is nice program for people who love to discovery Laos by other ways and off the beaten tracks. Having funs by experiencing dynamic and aventure activities such as treking, cycling, kaya...
Price $1,931.00